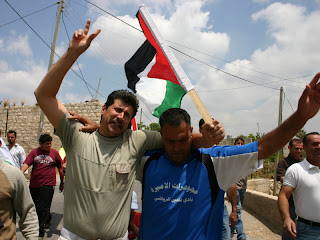 Congratulations to Emad Burnat and Guy Davidi on their Oscar nomination for their Palestinian documentary, "5 Broken Cameras."

The documentary follows the struggle of the people of Bil'in, a Palestinian village in the West Bank, as they use the power of non-violent resistance to demonstrate against the Israeli separation wall that cuts through their land.

I stayed in the village of Bil'in two years ago and had the honor of meeting both Emad and his brother Iyad Burnat.  Today's news of the documentary's Oscar nomination is thrilling and hopefully will provide greater awareness of Emad's inspiring documentary and further a greater global awakening for justice for the Palestinian people.

Posted by Katie Huerter at 8:35 PM No comments: