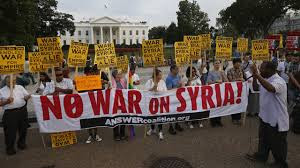 It is critically important that all those who oppose a new war and who are demonstrating today, stay in the streets over this crucial weekend. What people do can make a difference!!!

WE WILL RALLY in OMAHA, NEBRASKA
at 72nd & Dodge from 12pm-2pm on Saturday, Aug. 31st. to
STAND AGAINST U.S. MILITARY INTERVENTION IN SYRIA!
FACEBOOK EVENT: 'NO WAR WITH SYRIA' RALLY- OMAHA, NE 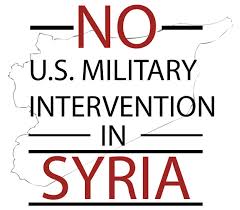 In the last few hours, reports have appeared that Pres. Obama is preparing to authorize an attack on Syria as soon as Saturday. An Aug. 29 New York Times article titled: “Obama Willing to Pursue Solo Syria Strikes, Aides Say,” includes:
“Although the officials cautioned that Mr. Obama had not made a final decision, all indications suggest that the strike could occur as soon as United Nations inspectors, who are investigating the Aug. 21 attack that killed hundreds of Syrians, leave the country. They are scheduled to depart Damascus, the capital, on Saturday.”
Such an attack would be nothing other than a new lawless and reckless act of aggression by the world’s greatest military superpower. The consequences of such an assault are unknowable in advance. In addition to further exacerbating the suffering of the Syrian people, the potential for a wider war is very real. Russia has announced it is moving warships to the eastern Mediterranean; Iran has stated that if Syria is attacked by the U.S., Israel will be hit, too.

Worldwide opposition to an attack is so profound that even the parliament of Great Britain, the U.S. closest ally for the last seven decades, has voted down British participation in military action against Syria!

Despite the growing global opposition, the Obama administration appears determined to launch yet another war in the Middle East.

But until the missiles are fired and the bombs dropped, it is still possible to stop the war before it starts. It is critically important that all those who oppose a new war and who are demonstrating today, stay in the streets over this crucial weekend. What people do can make a difference! 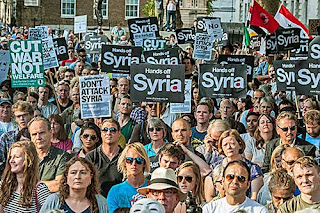 Many demonstrations are already being planned for this Saturday, August 21 in Washington DC, New York, Los Angeles, Chicago, Albuquerque and many other cities around the world.

Hands Off Syria – No New U.S. War in the Middle East! 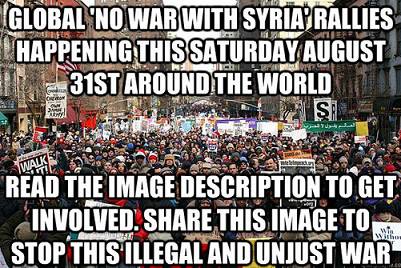 Posted by Katie Huerter at 5:22 AM No comments: