We are thrilled to invite you to partner with us in supporting an exciting project to help advance our work for peace and justice!
We will soon be traveling to Israel and Palestine as part of an upcoming delegation focused specifically on, “Incarceration, Detention and Political Prisoners," May 21 - June 3rd, 2016, cosponsored byInterfaith Peace Builders (IFPB)  and the American Friends Service Committee (AFSC).This delegation will explore Palestinian and Israeli efforts to achieve peace with justice and will include meetings that delve deeper into the issues of detention and incarceration, the Israeli military court system, and political prisoners - including meetings with organizations like Addameer, Defense for Children International Palestine, and New Profile.  The delegation will also feature meetings with Palestinian and Israeli leaders of civil society groups, grassroots organizers, religious leaders and more.Since our own work is at the grassroots level across the US Midwest (Iowa and Nebraska), Jody with AFSC's Immigrant Legal Services Program, and Katie with AFSC's Middle East Peacebuilding Program, we are especially eager to learn of the grassroots efforts for justice for Palestine.Our upcoming delegation offers us an unprecedented opportunity to connect our ongoing AFSC work for peace and racial justice in the US, including prison abolition, refugee rights, and end to mass incarceration, with the work of supporting justice and peace in Palestine. With our delegation departing in only a few short weeks, we are reaching out to our friends, family, and community, to help us raise the rest of the funding needed to help cover the remainder of our essential delegation fees, such as food, transportation, and accommodations. Please consider making a donation of $25 $50, $100, or more to partner with us on this exciting project. While in Israel and Palestine, we will be sending out emails about our experiences on the ground, please let us know if you are interested in receiving these emails, and we will add you to our list. When we return, we would love to either invite you to a scheduled presentation on our experience, and we would be thrilled to share our experience with you by blogging, working with you/your organization, organizing an event with your group, collaborating on strategy sessions with allies in our Iowa community and more. Thank you for your generous support in helping us reach our goal and please do not hesitate to contact either of us for more information.
B’shalom v ahava, (with peace and love)Jody Mashek;  email: jmashek@afsc.org Katie Huerter;  email: khuerter@afsc.org

Click here to visit Jody Mashek and Katie Huerter’s GoFundMe page!
Posted by Katie Huerter at 2:36 AM No comments: 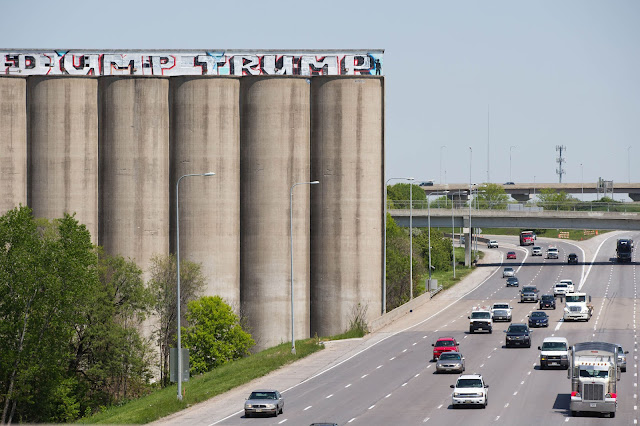 Donald Trump is bringing his neo-fascist circus to Omaha this Friday. Let's show him that Omaha will not stand for his hate.  Let's stand against his xenophobia, racism, and fascism.
Let's show him that HIS HATE is NOT welcome here.

ATTN: We will meet at Carter Lake Park, just off of Abbot Drive at 1:30pm and Take the protest to Eppley, down Abbott Drive.

We believe Trump is a grave threat to democracy, freedom, human rights, equality, and the welfare of our country and all our people.

We have witnessed Trump inciting hatred against Muslims, immigrants, women, the disabled. We have seen him evidencing dangerous tendencies that threaten the bedrock of democracy: unleashing a lynch mob mentality against protestors, calling for the expulsion of Muslims from the country, bullying, and fear-mongering.

History has shown us what happens when people refuse to stand against hate-filled leaders.

We pledge ourselves to speak out in every way possible against the politics of hate and exclusion he represents.

Omaha News Coverage Prior to Trump's Scheduled Arrival on Friday, May 6, 2016:

Posted by Katie Huerter at 4:24 AM No comments: