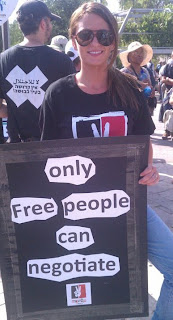 
Katie Huerter is the Middle East Peace Building Associate for the American Friends Service Committee (AFSC). She currently directs and facilitates AFSC’s Middle East Peace Education Project, providing information forums and building support for a just foreign policy toward Israel-Palestine throughout the U.S. Midwest Region, as well as, directs several national projects, campaigns, and events as part of AFSC’s Israel-Palestine Joint Program. Katie’s first visit to Israel and Palestine was during the Arab Spring in July 2011 as part of a delegation cosponsored by AFSC and Interfaith Peace Builders (IFPB). She has since both organized and participated in delegations to the Middle East, most recently in May 2014, when she visited AFSC’s offices and programs in Gaza and the West Bank.

Additionally, following her recent nomination to serve a three-year term on Interfaith Peace Builders' (IFPB) Board of Directors in July 2015, Katie now actively serves on IFPB's Board working to continue to foster AFSC's relationship with IFPB, as well as, actively working to enhance both IFPB and AFSC's collaborative efforts advocating for a just peace in Israel-Palestine.  A poignant example of Katie's direct participation in supporting AFSC's vital collaboration with IFPB, as well with other organizations in the US and throughout the Middle East, is highlighted in her upcoming role of co-leading a two-week delegation to Israel-Palestine in May 2016 that is being cosponsored by AFSC and Interfaith Peace Builders with a special focus on Incarceration, Detention and Political Prisoners.

As an undergraduate, Katie founded the University of Nebraska at Omaha’s Students for Justice in Palestine (SJP) Chapter, and currently is a member of SJP’s National Organizing Committee and serves locally on Nebraskans for Peace Palestinian Task Force’s Board. Katie continues to work locally and nationally as a vocal advocate and community organizer for equal rights, justice, and freedom in Israel and the occupied Palestinian territories.